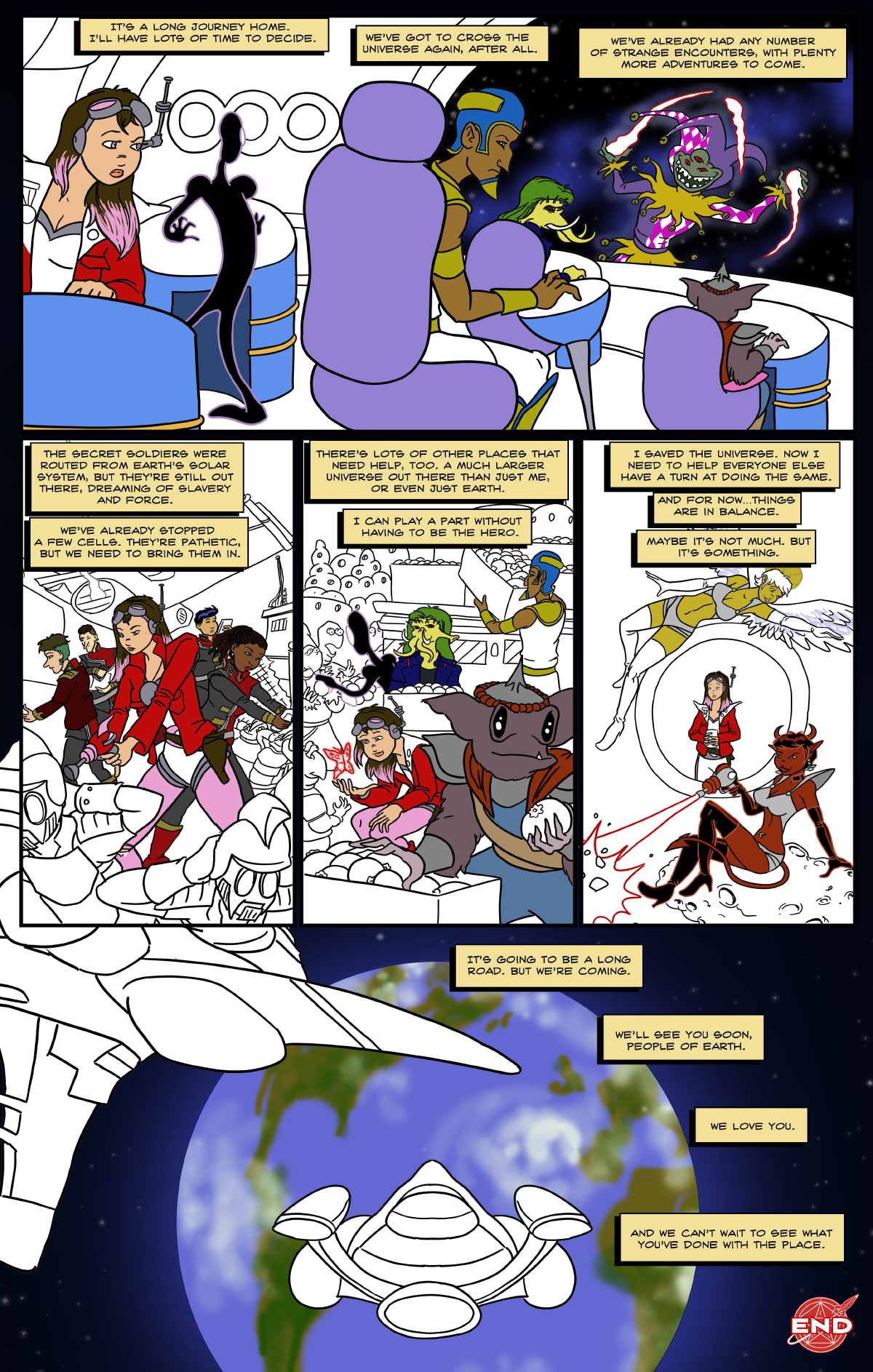 Average Rating: 5 (1 vote)
Rate this comic
Permalink: https://starforcepentacle.the-comic.org/comics/pl/1220256
Author Notes:
PhantasmicTales 7th Jun 2020, 3:44 PM
Well. Three years and 125 pages later, here it is, the final page of Starforce Pentacle. It's been a wild trip and while I'm sometimes less than pleased with what I've produced, finishing a full graphic novel which people are actually reading, even in half-baked form, is definitely something I can put on the old bucket list.

When I started this comic it was partly to dabble in the idea of magic, without really understanding what that meant. Now that I'm finished...I still don't know if I understand what it means. But it's certainly been a transformative couple of years, TO SAY THE LEAST. For me, but also for the entire planet.

One of the big realizations I've had stemming from making this comic is the level of ego required in thinking of yourself as, or even being, a hero, and the degree to which the idea of heroism skews our thinking. As I post this, people are taking to the streets en masse to fight for a better world, making inroads that would have seemed impossible even a month or two ago. It's absolutely incredible. I've been holed up making a silly space comic, but the real heroes are out marching, and after years and years of despair and stasis it suddenly looks like they might win. That didn't happen because of any one person, it happened because of the hard work of many, many people, and (hopefully) a moral awakening on the part of many others. I'm trying to find a way to say this that doesn't make it all about me, but I wanted to mark this particular moment in history and what a strange time it is to be wrapping up this comic.

In Starforce Pentacle, transformation happens suddenly. That's partly for magickal purposes and partly for narrative ones, but I have to confess I've always had a deep-down belief that the problems we face aren't insurmountable and that pressure has been building behind the dam for some time, so to speak. While it's true real change takes time, the foundations for change often seem to be laid with amazing speed for people who didn't see it coming. This idea obviously fed into my work and there's clearly been a remarkable confluence in the real world.

Again, I'm risking sounding messianic here and I want it to be clear that's not what I'm getting at. It just seems that trying to access magic through comics has plugged me into the ebb and flow of...something. The universe, the collective will? Or a delusion that enough people shared that it became reality.

I still don't understand magic, but I've glimpsed the outlines of something and I hope to continue exploring it. Yes, I think Starforce Pentacle will continue eventually. And maybe more.

The most immediate plan is to tweak these comics, finish colouring and maybe a further polish, possibly redo some panels, and then put them up on Webtoon. I'll be linking to that here when it happens. In the meantime, if you like what I've done you can read a bunch of my other comics at comixology and a few other places via www.phantasmictales.com. I'll be adding some new comics there soon and over the rest of the year, including, hopefully, new issues of Lemuria and Nightbeach. If you haven't checked those out, they're super cheap, lighter in tone than Starforce Pentacle, and I'm proud of them.

I also want to throw up a reminder that I have a Patreon, which helps me continue to focus on my comics. I post bonus comics, illustrations and, soon, short stories there, so if you want more stuff from me, that's the place to go! I'm also hoping to launch a Kickstarter soon, and a few other projects. Oh, and I have a podcast about genre fiction that I'm pretty proud of.

Thanks and blessings to everyone for your support and readership, and hope to be back at it soon. Until then, let's keep looking to the stars.
Edit Delete